Review of Sunrise at Sunset by Jaz Primo


This review was posted as part of the Romancing Your Dark Side Paranormal Book Tour. For more information on other tour stops and authors participating, click HERE. 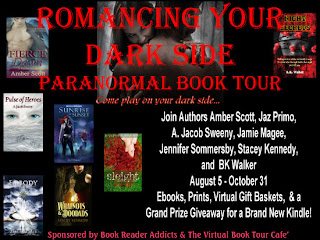 Sunrise at Sunset by Jaz Primo


If you’re looking for a different kind of vampire book, look no further than Jaz Primo’s Sunrise At Sunset. Don’t go into this novel expecting to find a toe-curling, good looking, bad boy vampire heartthrob. You won’t find that here. Instead you’ll find Katrina Rawlings, a centuries old alpha vampire who’s tired of living and ready to face the sunrise for a final time. Katrina isn’t sure what she has to live for anymore. Money isn’t hard to come by, but as others have said before, money doesn’t buy happiness. A life led as a vampire is often a life led alone, with little direct involvement in the everyday lives of humans.

But Katrina does find something to live for before submitting herself completely to a final death. Or should I say someone - a small human boy by the name of Caleb Taylor. Katrina sets her sights on helping young Caleb through the years, though from the sidelines of course. Thus begins a relationship that is quite different from others in the vampire/paranormal genre. It isn’t often that one gets to read about a strong leading female character. So many other books focus instead on the male character as the supernatural, while the female is often seen as weak and, dare I say it, wimpy. Katrina and Caleb are definite role reversals from the norm. While I wouldn’t go so far as to say that Caleb is weak and wimpy, he is certainly not the strongest in this relationship. Throughout the novel he finds himself in several situations that require him to be rescued by Katrina. Caleb is shy, easily frightened, and occasionally flighty. But on the other hand he is also very loyal to his friends and often acts very selfless, generous, and giving in regards to others.

When a female vampire from Katrina’s past, Chimalma, resurfaces in order to exact revenge over an event that happened many hundreds of years ago, Katrina brings in two fellow vampires, Alton and Paige, to help protect Caleb and defeat Chimalma. Paige is another strong female vampire. I absolutely adore her character! She’s smart, witty, and makes a great “babysitter” for Caleb. She’s tough when she needs to be, but also quick to bring out the humor. I can’t wait to learn more about Paige in future books.

Overall I was highly impressed by this first book by Jaz Primo. It was nice to read a book in the paranormal genre that did not follow the same exact path as so many others. The role reversal of Katrina and Caleb was a fresh look at a storyline that has been played out many times before, and I think it will be interesting to see how these characters grow and develop as the series progresses.

View all my reviews