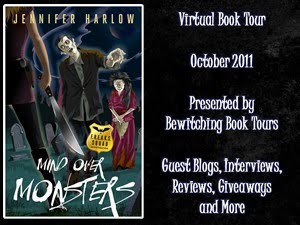 Thanks so much to Jennifer Harlow, author of the book Mind Over Monsters, for joining Books and Barks today! I hope my readers enjoy her special guest post today and check out her book. I haven't read it yet, but it sounds really interesting.


Bewitching Book Tours is the host for this virtual book tour. Be sure to check out the other stops on the list!
Mind Over Monsters Tour Spots 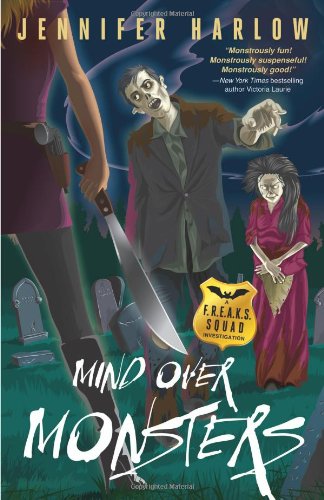 Description from Goodreads:
Paranormal heroes take on zombies in this funny and thrilling debut
Very few people know the truth about Beatrice Alexander. She's no ordinary schoolteacher with a fondness for classic movies. Beatrice can move objects with her mind, an embarrassing and dangerous skill that she's never learned to master—or embrace. After nearly killing her brother by accident, she joins F.R.E.A.K.S. The Federal Response to Extra-Sensory and Kindred Supernaturals is a top-secret offshoot of the FBI that "neutralizes" ghouls, trolls, and other monsters threatening humanity.
Beatrice has no desire to become Buffy the vampire slayer. But F.R.E.A.K.S. offers training to control her power. Also, she doesn't feel like such a freak next to the other supernatural members, including a cute former detective who's a werewolf and an unbearable vampire determined to seduce Beatrice. Despite a natural instinct to flee from hideous, bloodthirsty zombies, Beatrice must prove herself on her first mission to find a cunning necromancer.

I have a pretty healthy ego. It was not easy to get to this point. I had to work hard on liking myself, lots of soul searching and even therapy, and there are still days where I’m convinced that I’m the lowliest form of human destined to be shunned by everyone because they can see through my façade. I have maybe one of those a month, if you get my meaning. But most of the time I know I’m smart, funny, strong, capable, and even pretty when I care enough to try. However there is one area that still is quite vulnerable to attack and gives me the majority of my worries. That’s my writing.

Rejection sucks anyway you look at it. No matter how big your ego is it still stings. And as a writer sometimes that’s all you experience for years. I lost count of all my rejection letters that are still coming in to this day. Some people quit, other crazy people like me push through on a wing and a prayer. I’ve written twelve screenplays. None have been produced (yet). I’ve written seven books in ten years, only three have been bought (so far). Through the lean years the only thing that got me through was the belief in myself and my talent. The only positive reinforcement I received, that I would eventually reach the light at the end of the tunnel, was from my family. They read my books and told me I had a gift. There were some teachers along the way too, friends as well, who told me to keep on trucking. Some old high school friends even told me recently that they knew I’d become famous. I was tickled pink. But there was still some niggling doubt in the back of my mind that they were lying. Humoring me because they knew how much becoming an author meant to me. So when it came time for people outside my circle to read Mind Over Monsters, I was in a panic.

Back in March my publisher asked me to get some blurbs for the book. For those of you (like me) who have no idea what they are, they are the quotes on book covers from other authors saying how swell the book is. The thought of asking authors who I revere to read my book near about gave me a nervous breakdown. We asked Karen Chance, Kat Richardson, Victoria Laurie, Leanna Renee Heiber just to name a few, for a blurb. As the weeks passed I forgot about it as I was working on my steampunk book, then the blurbs started to come in. I was so nervous opening the e-mails my hands shook. But they loved it. All the people who I read through the years really liked my book! I’m still shocked. Maybe I was actually talented and fit to join their ranks. More months passed as the time for the book to come out drew closer. Then came the actual reviewers. The big guns who do it professionally. Oy.

There are four major book review magazines, non-local like the New York Times, that write reviews: Publisher’s Weekly, Booklist, The Library Journal, and Kirkus Reviews. Unbeknownst to me, these are pretty hard to get into unless you’re at one of the big publishers like Random House, but all publishers do send books to them. (They are just now starting to do e-books.) My publisher, Midnight Ink, is an independent publisher so the chances of getting in are even slimmer. So when I got my review from Kirkus, (see them all below) I was so happy. Not only did they think my book was worth their trouble but they actually liked it! About a month later came the PW review, also very good. Then came the Library Journal review. I was floored. Not only did they absolutely love it they reviewed me with other more popular authors like Diana Rowland and Jonathan Mayburry in a special article about zombie books. I did a happy dance after that one. (Still time to join the party Booklist)

But in the end it’s your reviews I really care about. My audience, the reader. I write to entertain. I’m no Faulkner, nor do I want to be. For the most part people read to get away from mundane life, or at least I do. My only goal is to give you a pleasurable experience, one where you laugh and shriek in equal amounts. I hope I accomplished that, but I’ll let you be the judge. And if you do like me and think I’m cool, perhaps you can join my fan club. My mom is the president.

Do reviews from other people matter to you? How much? How do you chose a book? Discuss.

The Buzz for Mind Over Monsters

“Monstrously fun! Monstrously suspenseful! Monstrously good!” –Victoria Laurie
“A gritty, dramatic police-procedural with a compelling heroine and a fascinating group of sidekicks.”
--Karen Chance
“Harlow offers treats for every paranormal lover to relish, with plenty of action, thrills, and laughter.”
--Leanna Renee Hieber
“Mind Over Monsters is funny, scary, and creepy—and ridiculous amounts of fun!” –Kat Richardson
“If Donald Westlake had gotten around to paranormal mystery, it would have sounded like this. Harlow’s debut is funny, creepy, and refreshingly brash.”  --Kirkus
“…readers can look forward to plenty of high-energy chases after odd supernatural baddies in future installments.”                 --Publisher’s Weekly
“This supersensory heroine and her paranormal partners are the most engaging detectives to face the walking dead since Scully and Mulder…entirely marvelous, monstrous fun, this is sure to amass an army of fans.”    --The Library Journal

Jennifer Harlow is the author of Mind Over Monsters, the first in the F.R.E.A.K.S Squad paranormal mystery series. You can follow her blog “Tales From the Darkside” at her website www.jenniferharlowbooks.com. Also friend her on Facebook and follow her on Twitter at jenharlowbooks.
Posted by Jennifer G. at 4:00 AM