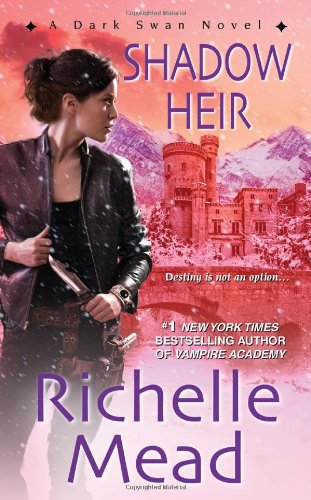 
Review copy was provided by publisher.


Description from Goodreads:
#1 New York Times bestselling author Richelle Mead returns to the Otherworld, a mystic land inextricably linked to our own--and balanced precariously on one woman's desperate courage... Shaman-for-hire Eugenie Markham strives to keep the mortal realm safe from trespassing entities. But as the Thorn Land's prophecy-haunted queen, there's no refuge for her and her soon-to-be-born-children when a mysterious blight begins to devastate the Otherworld... The spell-driven source of the blight isn't the only challenge to Eugenie's instincts. Fairy king Dorian is sacrificing everything to help, but Eugenie can't trust the synergy drawing them back together. The uneasy truce between her and her shape shifter ex-lover Kiyo is endangered by secrets he can't--or won't--reveal. And as a formidable force rises to also threaten the human world, Eugenie must use her own cursed fate as a weapon--and risk the ultimate sacrifice..


My Thoughts:
I have loved every book in the Dark Swan series by Richelle Mead.  There are so many twists and turns throughout each one that a reader is sure to be kept on their toes, never knowing what’s going to happen next.  Shadow Heir is no exception.  I really enjoyed reading this book - its just the last few pages I am bothered by.  To me, the ending felt more like it belonged to one of the other books in the series, not the FINAL book.  There are certain things (can’t say too much without spoiling anybody) that do not feel completed.  If I hadn’t known any better, I would have honestly thought there was another book coming out in this series! But I understand that Mead might have wanted to leave the ending where the reader can make their own future for the characters, or maybe she has plans we don’t know about.  Either way, I really did love this book, and I guess I’m just not ready to leave the Dark Swan world.  Eugenie is an awesome kick-butt heroine who doesn’t let her power get to her head and always works to protect those she loves and cares for.

There were some interesting side characters in Shadow Heir, and the reader also learns more about what makes Volusion the way he is.  I thought it was extremely cool to be able to find out more about him, as he’s always been a dark and shadowy feature of the story.  By the end, I actually felt kind of sorry for him, and anyone who’s read these novels knows what a feat that is!  There are other secrets that come out in Shadow Heir that will surprise many readers, as I know they were a surprise for me as well.

This is a series that I recommend to all of my friends who are fans of paranormal romance and urban fantasy.  Richelle Mead creates a world that is dark and exciting, with characters that are layered and fascinating.  None of them are perfect, but together they make for an engrossing read that will keep you interested till the very end.